You wake up some random morning during a global pandemic, and nearly everything in your newsfeed is about bitcoin, blockchain, and NFTs. It is bewildering, because huge swaths of what are usually culturally intelligent people seem to be going all in on this phenomenon. Personally, I have no real interest in understanding it more than the 3 to 5 articles I’ve read: it more feels like a professional responsibility to know a wee bit better, since several people already have pushed and lobbied our community to become involved in this brave new world, by accepting blockchain donations for the Zen Center in the future. So I should at least have at least an elementary school-level understanding.

Just a few basic principles of this new thought-form are sufficient to comprehend, like having the most general, ground-level idea of how this heavy airplane gets up into the air from a running position. Just that. Yet try though I did to detect even some tiny morsel of comprehension, until somehow my teeth couldn’t detect anything substantial worth using precious mental bandwidth to need knowing. The whole thing seemed shockingly insubstantial, devoid of meaning, merely a cheap barter-culture of no True Self.

Yet I have artist friends who are beginning to sell their works as NFTs. One of the artists, Matt Semke, is one of the most dedicated artists I have heard of: he has produced a singular and unique piece of consistently intelligent artwork every single day for the last six years. Without a single break. And his works are philosophical, comical, whimsical, satirical, innocent and naïve. As commentaries on the human spirit they are serious work, and he would deserve anything he could get for them, since he has done it for free for six years, never charging for his extraordinary visual insights into the human condition.

Most of the stuff I have seen being written about has always struck me as being cheap and completely ungratifying in any way I had experienced art to be. Something of the strip mall in them — faceless, soulless, pure transactionality. It was just a whiff I had, but I’ve never had time or interest to look deeply into the nature of this cultural phenomenon.

This article put this entire new cultural phenomenon into perspective: it points to why I felt that whiff in the nose. 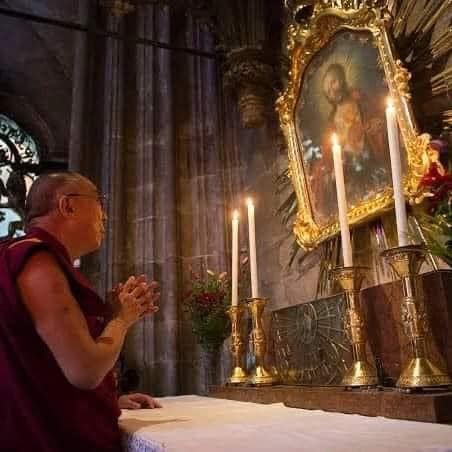 An eminent teacher of Zen once said, “True Self always recognises True Self.”

Four years ago today, Christmas Day 2017, our Zen Center Regensburg residential family received a box of chocolates and this card from Kerstin Zeise. A self-proclaimed “hometown girl of Regensburg”, she more than anyone helped me to establish this blessed oasis of silence located right smack in the heart of the Altstadt (Old Town) of this stunning jewel of medieval Bavarian culture. She was our Director, my right-hand woman, a shining force of optimism and total can-do, and really the force that made this all happen. She set up all of the administrative structure (if you know anything about German culture, that is life-or-death, the very oxygen of any organization) that we live off today.

Sunim, Patra, Niko, and Yonym,
Without you, this important place couldn’t exist. THANK YOU for your support, friendship, energy, love — without YOU, I couldn’t exist!
MERRY CHRISTMAS & A HAPPY NEW YEAR!

A mere four months later, Kerstin was dead — not 53 years old. A passionate outdoorswoman and mother of two, she was a fit biker, climber, hiker, and skier. An aggressive cancer had metastasised from breast to, well, all over.

On a cold, snowy day, some friends gathered to lower a small wooden pot of this formerly muscular, vivacious soul’s ashes into a hole in the ground on a sloping hillside in a natural forest by a nondescript, half-mossy rock with no name. There was no headstone but the roots of a gnarled tree. She had requested that we all chant the Heart Sutra in Korean. The moktak reverberated through an empty stand of trees creaking in their stiff-backed swellings. As the last winding down of the moktak sounded through the forest, we held a few moments of silence. I had wanted to bow three times to the hole of her interment, but had worn the most formal robing, and the fabric was already causing me to trip as I walked. Seeming to know my thoughts, Niko stepped forward with his handful of dirt for the tiny hole of her hibernation, and bowed the three bows representing our Sangha’s gratitude, to the dumb hole in the ground. There were no words among these friends: only a freezing early-Spring wind among the naked trees.

And that was it.

“Without YOU, I couldn’t exist.”

Though I had received the card some months before her death — and none of us, not even her, had any idea that her cancer would turn so vicious, so suddenly, from something she believed she would recover from — the card had immediately been cleared out with other holiday things and placed in a box in a closest. A paper among many stacks of papers. In fact, I barely remembered having received it at all.

One year later, while cleaning out the closet, I came across the card again. I had forgotten about it — just one card among the many one receives around Christmas. Her handwriting was familiar as I flipped it over. Glancing down through the message, the words leapt out — fresh with pain, but also profound existential import, something unrealisable when we had first received it while she still lived and there was a sense of this healthy Bavarian outliving us all and the mountains:

“Without YOU, I couldn’t exist.”

Now, her ashes withered below a rock in a nameless, tree-creaking forest above a knoll near some farm by a bend in the river Naab, the “she” I knew and loved — it does not “exist.”

Then, if she doesn’t exist, do I? This illusion of reality I experience — what really is it to her, below that rock? 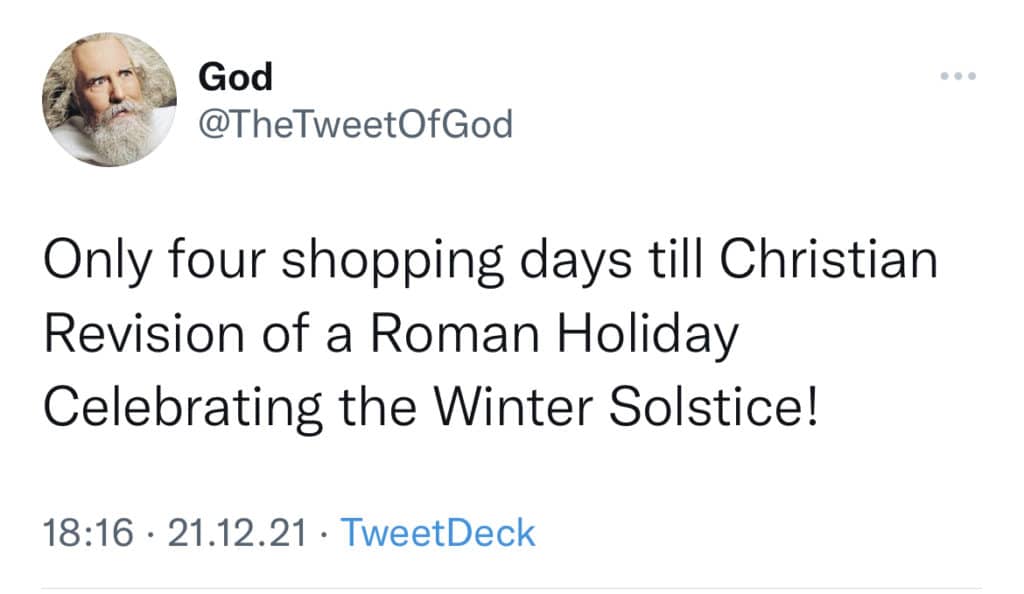 God tweeted this four days ago:

And immediately after, one of his pagan Creation seconded the historiographical analysis:

It still blows my mind when people freak out on hearing Zen Master Seung Sahn’s oft-quoted “Being born is already a big mistake.” People really don’t really seem get it. And it is not some Zen-like riddle to be penetrated. But it has been said as far back as no less than Sophocles, who had the Chorus sing in one of his plays, “Never to have been born is best. / But if we must see the light, the next best / Is quickly returning whence we came.”

I think people would get greater release from their mind-created suffering, the tragedy of their lives and its painful vicissitudes, if they could’ve hitched a ride along with the James Webb Telescope, launched a few hours ago in French Guyana. Looking back on this “pale blue dot” (Carl Sagan) from space, the borders of countries non-existent, the ranking of the Premier League or the state of the NFL playoffs the totally immaterial fictional fictional for reality that they are, the vaccine- or mask-mandates resistance-ignorance, the cultural fight over abortion rights and gay marriage, even the very climate catastrophe itself, would show this statement’s real truth.

Until we obtain such passengership on something akin to the Webb Telescope, the telescopes of Sophocles, Zen Master Seung Sahn, and Cioran will have to suffice. It seems like low-tech engineering, their economy of phrasing, but it’s actually the most high-tech insight we have into the human condition. Then, everything is just OK, as it is. Not a vacuum-tubed antiseptic “OK”, which leads to a nihilism, by nature, but a letting go so that the natural lenses of the mind’s eye can see reality as clearly as William Blake saw: “If the doors of perception were cleansed every thing would appear to man as it is, Infinite. For man has closed himself up, till he sees all things thro’ narrow chinks of his cavern.” (“The Marriage of Heaven and Hell”).